Doko-san has been practicing Zen since 1989 and met Hogen-san in 1991. He became a monastic disciple in 1994, with dharma heir transmission in November 2007. He became Hogen-san's "fully transmitted successor and a new ancestor in the lineage" in 2009. He is the senior monastic of Open Way Zen sangha, Abbot of Dochu-an and Shumpu-an Zen hermitages in Northern NSW, and guiding teacher of Little Zen Sangha Hobart, Australia. He lives in Mullumbimby, NSW, with fellow monastic and lay disciples. Click here for letter of transmission.

Doko-san on the left with monk Shodo Isshin

Quentin studied about Buddhism in the late 1960s when a medical student in Adelaide by reading publications from the Buddhist Publication Society of Shri Lanka. This he continued to do when working as a young doctor in the 1970s. In 1974 he went to Sydney to study Public Health and met and learned from Phra Smai of the Thai Sangha - now Than Chau Khun Smai, and Lama Yeshe of the FPMT Tibetan Sangha.

On returning to Papua New Guinea he continued his reading and learning and attended retreats and teachings at Buddha House Tibetan (FPMT) in Adelaide when he went there to visit his parents. In the 1990s after he, his wife and two daughters moved to Cairns he undertook Vipassina retreats at Pomona, north of Brisbane, under the guidance of the Goenka organisation. In the latter half or the 1990s he worked with Laurence Kantipalo to help establish the Bochicitta Buddhist Centre in Cairns and was its foundation president. He undertook teachings and retreats with the guidance of Laurence Kantipalo. Amongst the visiting teachers to the centre were Lama Choedak and Master Hogen-san. He undertook several retreats with Master Hogen-san in Cairns and in southern Queensland and was ordained by him on the 12th of March 2005 and given the Dharma name of Genshu.

Master Hogen-san gave him permission to teach and also supported his application to the Buddhist Education Foundation of Taiwan to have a number of books of Buddhist teachings published, including a number of books translated into Tok Pisin for use in Papua New Guinea. As well as teaching in Cairns he also taught about the Buddhist teaching and meditation in Papua New Guinea. In 2008 the Sangha bilong Groim Klia Save (Sangha for developing Understanding and Wisdom) was started on Kali Island in the Manus Province of Papua New Guinea. This Sangha is based on Thich Nhat Hanh's Order of Interbeng.

Quentin has written a book titled "How to Grow a Good Life and Happiness".
Click here for details on downloading the book or ordering a hard copy.

Quentin has also written or translated a number of texts into the Papua New Guinean language of Tok Pisin. Details of these can be found here. We also have texts in Tok Pisin downloadable from our Resources page 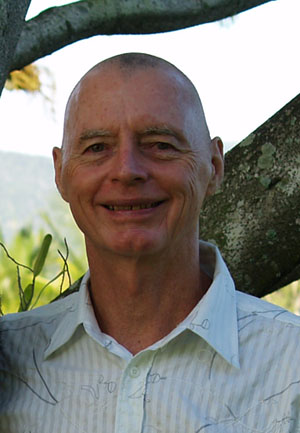